Electrical power in the future will be supplied by a variety of alternative sources and this exhibition demonstrates in a magical and whimsical way how cooperative power generation is necessary to achieve our future electrical needs. 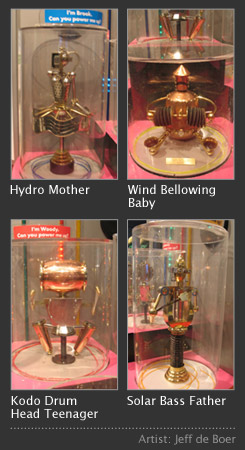 When electrical energy from each generator exceeds 1 volt, a corresponding family member is activated in three ways. First the overhead chaser lights activates its associated family member who then begins to move in a whimsical way while at the same time a very unique musical sound track begins to play.

For instance, Hydro Mother's upper body rotates continuously while her hands move up and down on her wavy skirt. At the same time, a lively calliope based composition begins to play along watery and bubbly sounds.