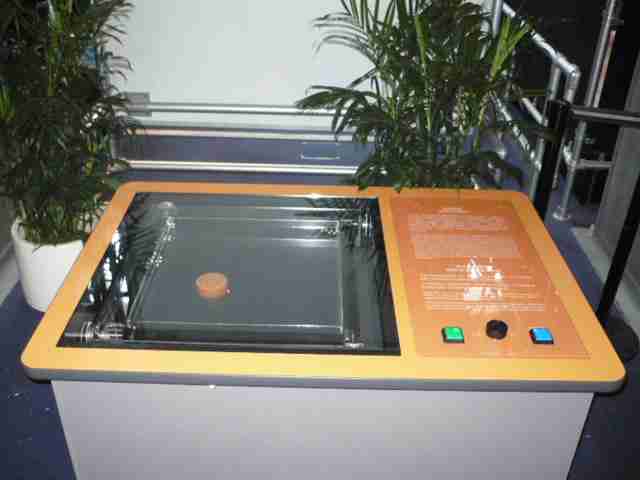 In 1827, Robert Brown, an English botanist, observed chaotic motion of dust from pollen grains on the surface of water in a microscope sample. However it wasn't until Einstein re-examined his findings that this discovery was properly identified as molecular motion. Even in 1905, many scientist still believed matter was continuous and not granular in nature.
By calculating both the size of an atom and its molecular weight, Einstein showed once and for all, that matter is made of individual atoms!
Download a Printable Version (PDF) 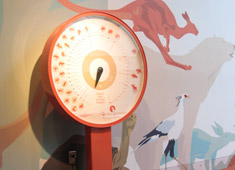 Visitors are presented with a large dial type weigh scale made to simulate, in appearance, an old style mechanical dial weigh scale of the past. Visitors stand on the scale and measure their weight both kilograms and comparatively with silhouettes of animal both contemporary and extinct up to 500kg.
Download a Printable Version (PDF) 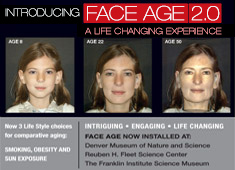 Now faster, more compact and affordable, it incorporates many of our proven features and adds several important new ones like our Email Option and 2nd Language Option. If you are 6 years or older, this one-of-a-kind experience allows you to create a series of progressively aged images of your face so you can see what you might look like as you grow up and grow older, all the way to age 70! You can also choose one of 3 Life Style Choices of Smoking, Obesity and UV Exposure for comparative aging.
For pricing and delivery information: Download a Printable Version (PDF) 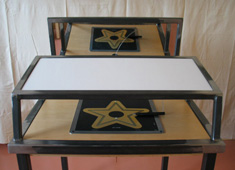 Go ahead – stimulate your brain! Fridtjof Nansen, a famous Norwegian scientist discovered that when we learn a new task, we are actually stimulating new brain cell growth. His research contradicted the common belief that we are born with a finite number of brain cells that slowly die over time, never to be replaced like other cells in our bodies.
In Star Tracer, users are presented with a novel task as they sit facing the Star's reflection in a mirror and use a conductive tracing pen while attempting to trace the path inside the Star's outline. If the pen strays into the gold area, a buzzer will sound to encourage them to try again. If users adapt to this new task well, they are well on their way to growing new brain cells!
Download a Printable Version (PDF) 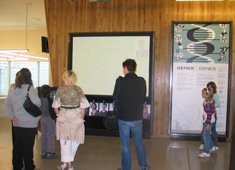 The Genographic Project, sponsored by the National Geographic Society, has collected well over 30,000 DNA samples from people all over the world. There is a special focus on sampling DNA from native Africans in order to study the origins of the first humans and their subsequent migration out of Africa.
Inspired by the "Our Traveling Genes" exhibit, Exhibiteers recommended to the Norwegian project team, that they select eight well known Norwegian personalities for DNA testing as a way to better relate to their Norwegian audience. Included among the 8 personalities are Sir Henrik Abel who is a famous Norwegian mathematician, as well as other notables such as a prominent chef, an accomplished artist, and a Lappland descendent of Norway.
The Genographic Project program has uncovered many fascinating details about our ancient ancestry including a genetic "Adam" who lived some 60,000 years ago and a genetic "Eve" who lived 150,000 years ago from whom we have all descended. The Genographic Project's web site was also made available to the visitor to promote more in depth inquiries.
Download a Printable Version (PDF) 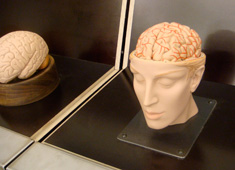 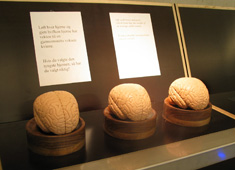